by Mark Oppedahl, Cofounder and Distinguished Software Engineer
on October 28, 2019

Twenty-five years at Cartegraph. Wow. It’s impossible to process how much time that is. But, how quickly it’s gone by. Some things seem like forever ago, like not having mobile phones let alone smart phones. Others seem recent, like Cartegraph’s first Christmas party.

There were four of us who started the company on October 31, 1994. Scott Taylor was our leader, whom I always assume everyone at Cartegraph remembers, but it’s surprising how many new people don’t. He masterminded the business plan and navigated the complexities of launching a start-up.

A lot of Cartegraph’s culture of Midwest nice and prioritization of employee well being I attribute to Scott. He’s also at fault for the Cartegraph “flag,” since for some reason he always liked to have a product name with a unique spelling, so CartéGraph, or Solæris, or Raedius. He’s retired now, living in Colorado and Florida.

Jay Wickham was our first sales and marketing guy and was enthusiastic about showing potential clients how awesome our product was. He’s still in the Dubuque area, helping other start-ups get off the ground and serving on the Dubuque County Board of Supervisors.

And I was the company’s first coder, and I’m still here, still coding. 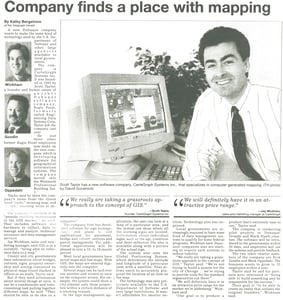 We officially started Halloween day, 1994. Despite the story of starting in Scott’s basement, our first day was actually in a basement conference room at the Clarion Hotel in downtown Dubuque, now the Holiday Inn. We had meetings throughout the day with bankers and lawyers. Scott had piles of documents for us to sign. It was all very official. The next day, November 1, was the first work day in Scott’s basement.

Rick and I lived fairly near each other and carpooled in his Mazda RX-7 so there would only be two cars parked outside Scott’s house each day. We didn’t want to upset the neighbors. And yes, when we arrived in the morning, we entered through the garage door, keypad code 4235.

Rick made hazelnut-flavored coffee to fuel our efforts, which was supplemented by treats baked by Scott’s wife Rhonda (with her butter budget). We had periodic visits from Scott’s kids, especially the younger ones—Lauren, who drew in permanent marker on the whiteboard, and Mike, who was still a toddler and enjoyed sharing his sippy cup full of Cheerios with the family dog Star.

We did our work on 1994-era PCs—Gateways I think—in what must have been Windows for Workgroups 3.11. (We had to wait a year before Windows 95 came out). My programming for SIGNview 1.0 was in Visual C++, only a year or two old at the time, building on the Visual Basic prototype Scott and Rick had used for early sales pitches. The data resided in an MS Access database—client/server wasn’t a thing yet and everything was installed locally. A cutting-edge feature was integrating with GPS using a Trimble puck-style antenna that we set outside the basement window for testing. 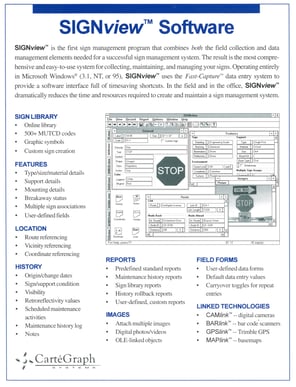 We only spent a short time in the basement before we moved into a “real” office suite on the west end of town. We quickly grew our staff—in my department it was one more programmer, then two as we finished SIGNview and moved on to other assets in the MAPview series. We soon outgrew that suite and started renting the one across the hall, then eventually moved the development staff offsite to a temporary space for a year. Finally in 2000, we built and moved into the building we’re in now. I think we were only the third building in the technology park.

Through the years, we’ve certainly had ups and downs, but in my mind at least, our future was never in doubt. We’ve grown our software footprint to cover a large swath of the public works space, we’ve stayed true to the “carte” in Cartegraph with our focus on maps and their central importance to asset and work management. We’ve also held onto our corporate culture, making Cartegraph a place where it’s great to go to work each day. 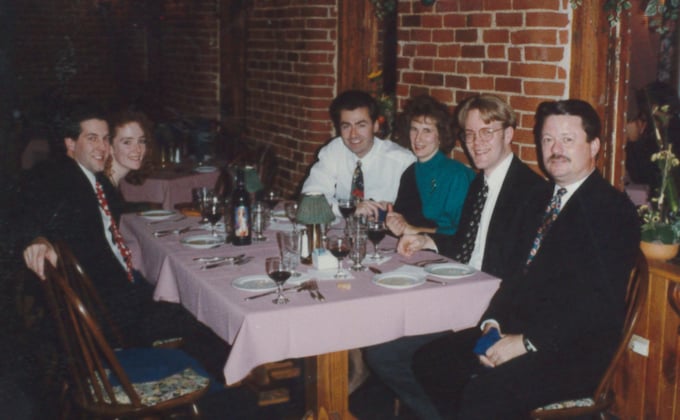 The first Christmas party I mentioned was really just the four of us founders plus spouses going out for dinner to Fried Green Tomatoes in Galena, IL. Back then, it was in the old “county poor farm” building south of Galena, very rustic and historic. I remember delicious wine and pasta, and talking excitedly about what was sure to be Cartegraph’s amazing future. And, we were right!